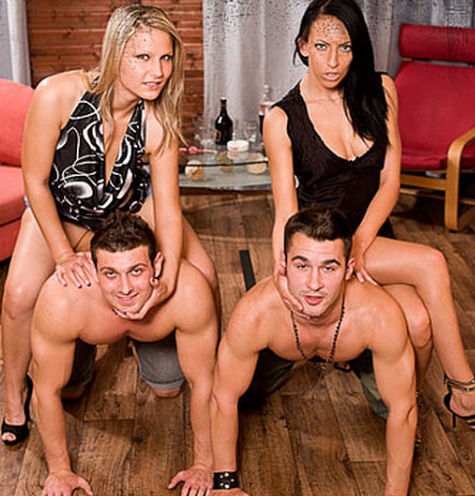 In 'Pure Suffering' we are introduced to two fancy ladies, sitting around, drinking liqueur and smoking cigarettes. Wanting a little excitement, they call a couple of their guy friends to come over. Honza Copak and Jiri Jiskra duly arrive. Fooling around over a game of darts things soon heat up just as the guys are accosted and made to strip. HOnza is the first to be naked, followed by Jiri. The girls then start to suck on the guys cock and force them to kiss each other. Honza is then blindfolded and it is not long before Jiri is forced to suck Honza's big cock. Then Honza is tricked into fucking Jiri's tight ass with his rock hard cock. When the girls have had enough of that fun they move on to the next thing. That is using strap-ons to fuck Jiri's open hole and mouth. They really work him over, as Honza just sits in a chair, still blindfolded. He is then moved over and made to suck on one of the girls strap-ons. Honza is then made to bend over and that 'cock' is shoved deep in his ass. The girls then make Honza wank himself and shoot his creamy load all over Jiri's chest. Jiri is then made to suck on that sticky cock as a great finale to a very good scene. 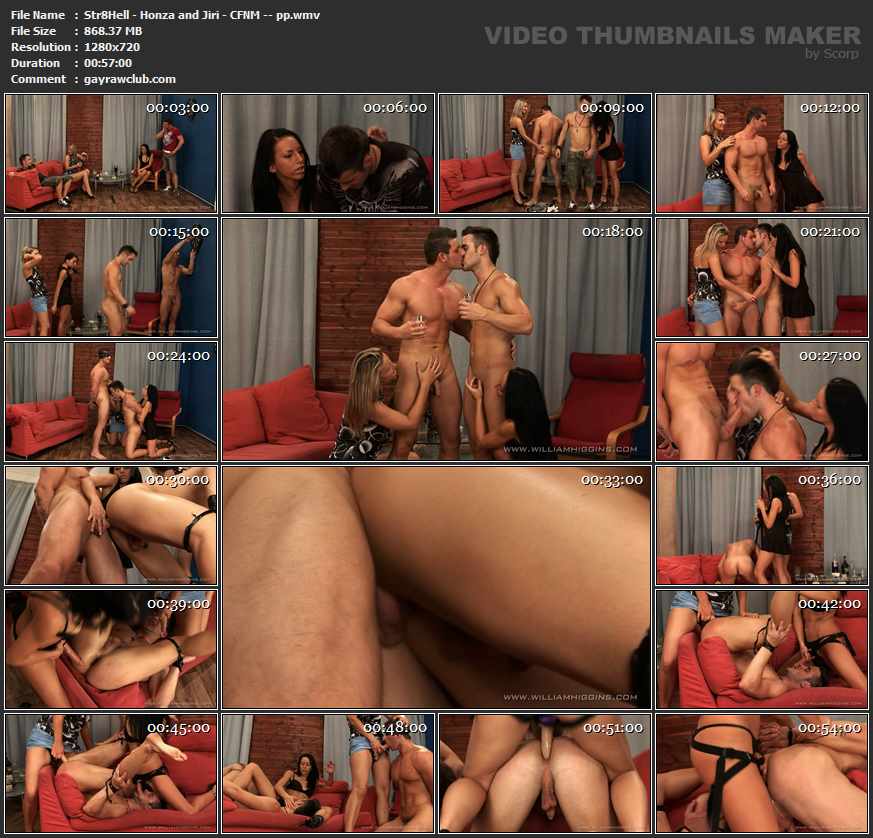 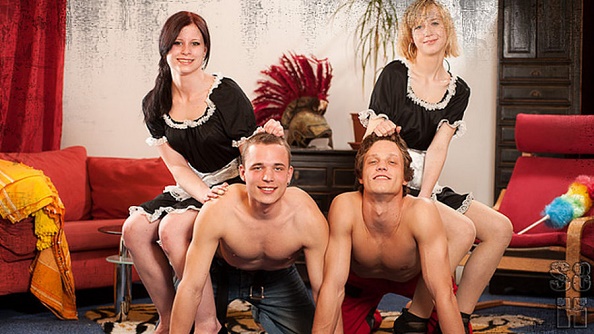 Dima Lukin and Hugo Antonin feature in this CFNM, with the Mad Maids. The maids are cleaning up after what seems to be a rather messy party. Chatting all the while they go about their work. One of the maid goes to move a blanket and under it she finds a sleeping Dima. They giggle at the sight of him asleep, with a cushion on his body. As one girl tries to peek under the cushion she thinks he is naked. Gently they remove the cushion and, indeed, Dima is naked. Also asleep on a chair is Hugo, as the girls remove his cover they find that he has kept his shorts on. Returning their attention to Dima one girl begins to tickle him with a duster, when she reaches his face he awakens. The other girl quickly grabs his arms while the other one jumps on him and covers his mouth to stop him from screaming out. They gag Dima with a ball gag to keep him quiet, and tie his wrists and ankles. Then they return to Hugo. They wake him by squirting him with cleaning fluid. They pull him to his feet and restrain him with his arms tied and held from above. Next they remove his shorts and gag him with them. His cock is beginning to get hard while they work on him. Taking whips the girls begin to whip his body, with Hugo trying to move out of the way, but unsuccessfully. Then they turn him around and begin to play with his ass and legs. Pulling on the hair and biting his cheeks before one girl shoves a finger in his ass hole. Turning Anton around again they see that his cock is hard and they suck on his cock and pull on his balls. Then they move Dima over to join them and remove his gag. They force him to suck on Anton's cock. Then they turn Hugo around and shove Dima's face into his ass crack trying to make him lick the ass. Dima is made to stand and he is forced to kiss Hugo as well. They release Hugo and put him on the sofa, replacing him with Dima so they can begin to play with him too. Soon they have his cock rock hard and suck on it, as they did with Hugo. Then they turn him around too to use his ass as a receptacle for a finger. Next the girls take a boy each and bend them over the sofa and, wearing strapons, begin to fuck them. They fuck them nice and hard, with the guys moaning as they feel the rubber dicks deep in their asses. Finally the guys are made to kneel facing each other and the girls wank them and make them cum over each other. 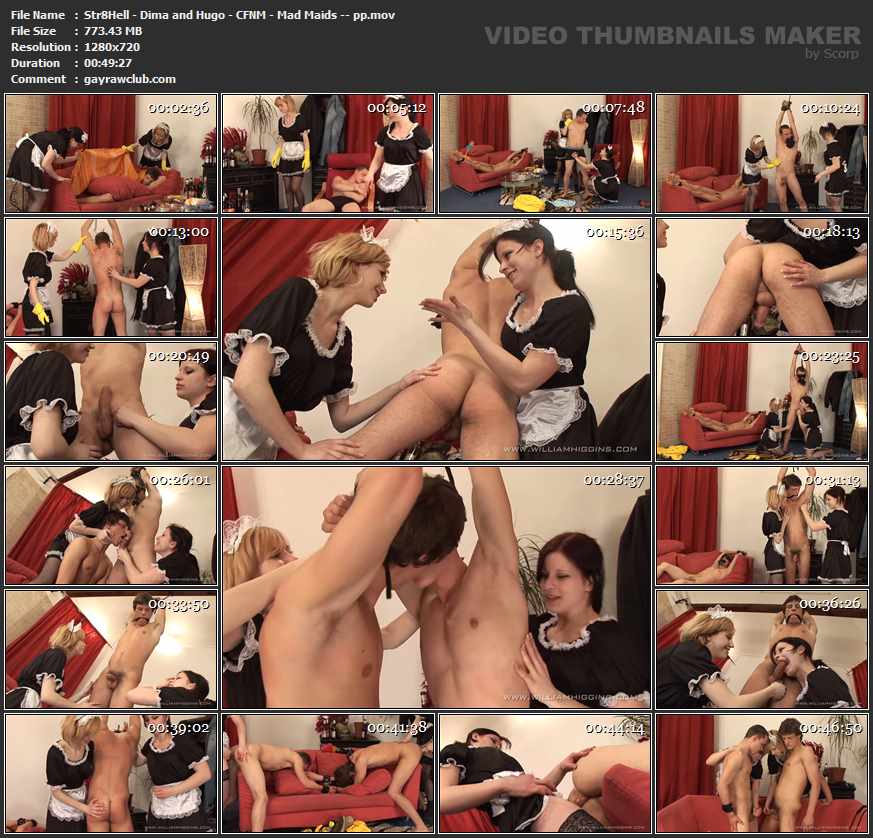 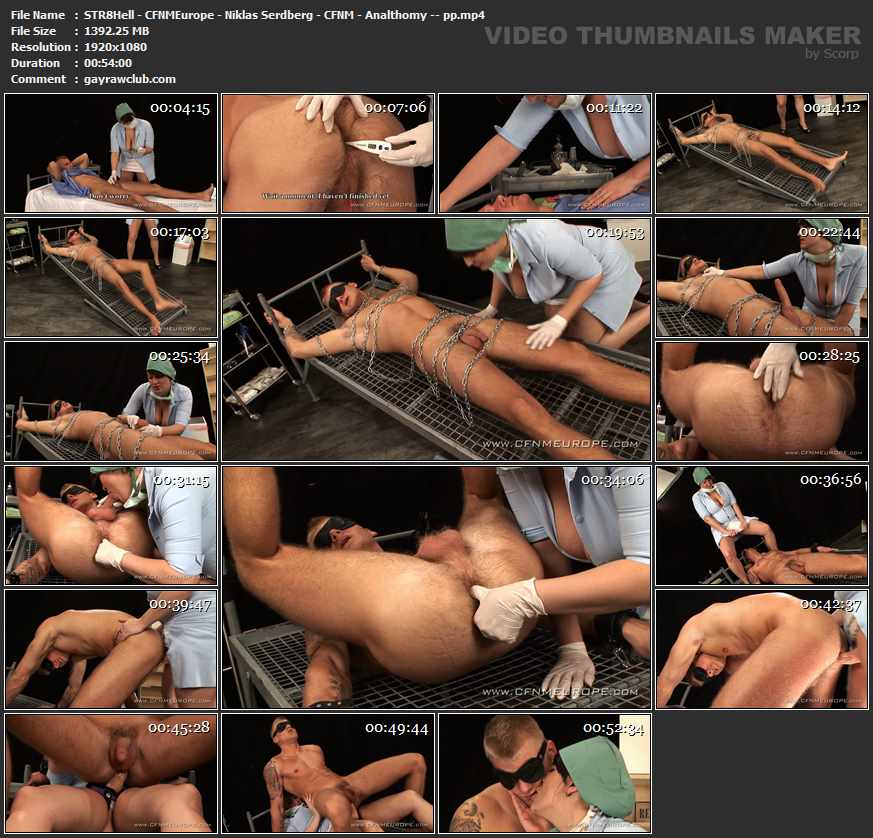 Kristof Hertz did an Easter CFNM, Bunny Bashing. It is a custom in the Czech Republic for boys to go out and smack girls with birch twigs, at Easter. So Kristof has two girls that he is doing this with, chasing them around the table. Then they settle down and chat and start to party, having a drink. It doesn't take long to move on to other things though. The girls begin to open his shirt. All seems to be going well as they also open his jeans, revealing a big hard cock. When the jeans are off things get somewhat rougher as one girl hold Kristof's hands behind his head and the other girl starts to suck and bit his throbbing cock. They also start to scratch Kristof's body and slap his big balls. Kristof is moaning as he feels it all. Then they remove the ribbon from Kristof's birch twigs and tie it around his cock, using the twigs to hit him, as he had hit them earlier. With his cock still rock hard Kristof is moved onto his knees, his ass exposed and the girls beat it with their sticks. Then one girl started to play with that ass, fingering the hole and slapping on the balls again. Soon they take things further using Kristof's ass with their strap-ons. He is fucked and forced to suck as well. Then, as he is wanked he has to ride one of the rubber cocks. The girls lose patience when he doesn't cum quickly enough for them and throw him out. 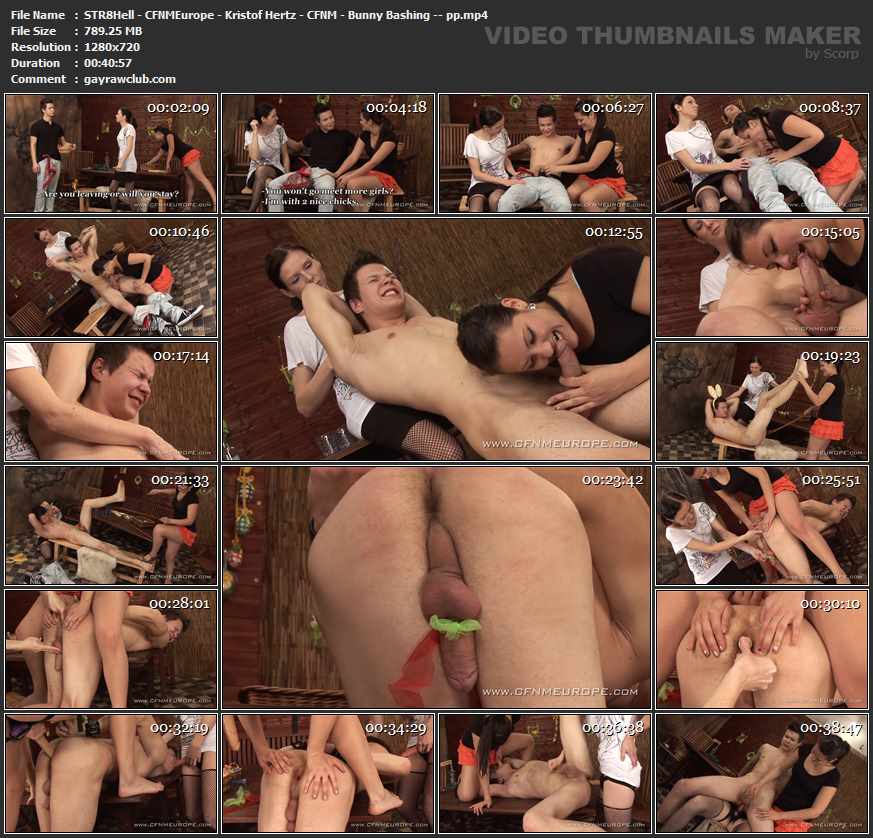 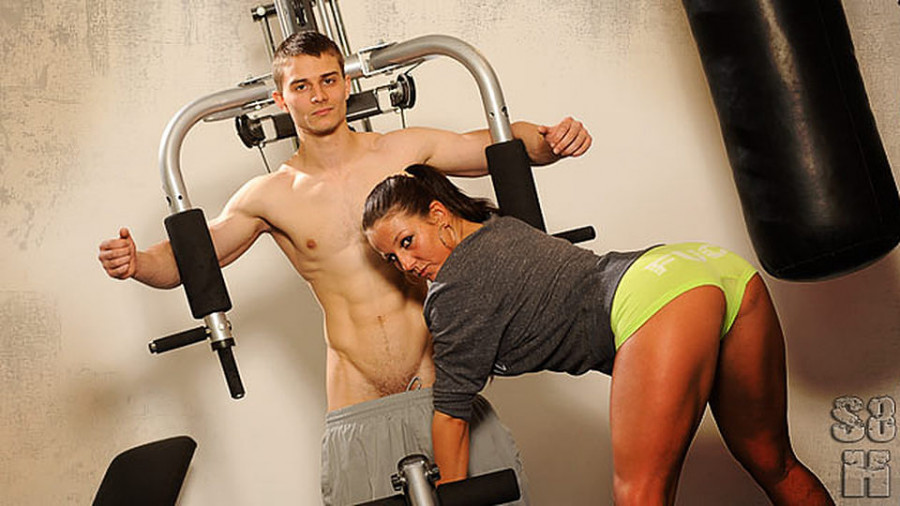 What a handsome guy Jan Faust is. This stunner is in the gym for some fitness training. His trainer is a very sexy young lady who wastes no time in getting Jan to work. She gives him instructions on what she needs him to do. As he works he is told to remove his top, which shows off just how well his chest is developed. As he exercises those hot muslces flex beautifully. Then the trainer has Daniel remove his shorts, but it reveals some very strange underwear. The trainer is not impressed and supplies a jockstrap for Jan to wear. He changes the underwear and continues to take instruction, doing some squats, showing off his sexy ass. As he finishes the squats and turns around it is clear and his is sporting a huge erection, which the trainer is quick to notice. This is a great start to our latest series, and sets things up beautifully for the rest of it. 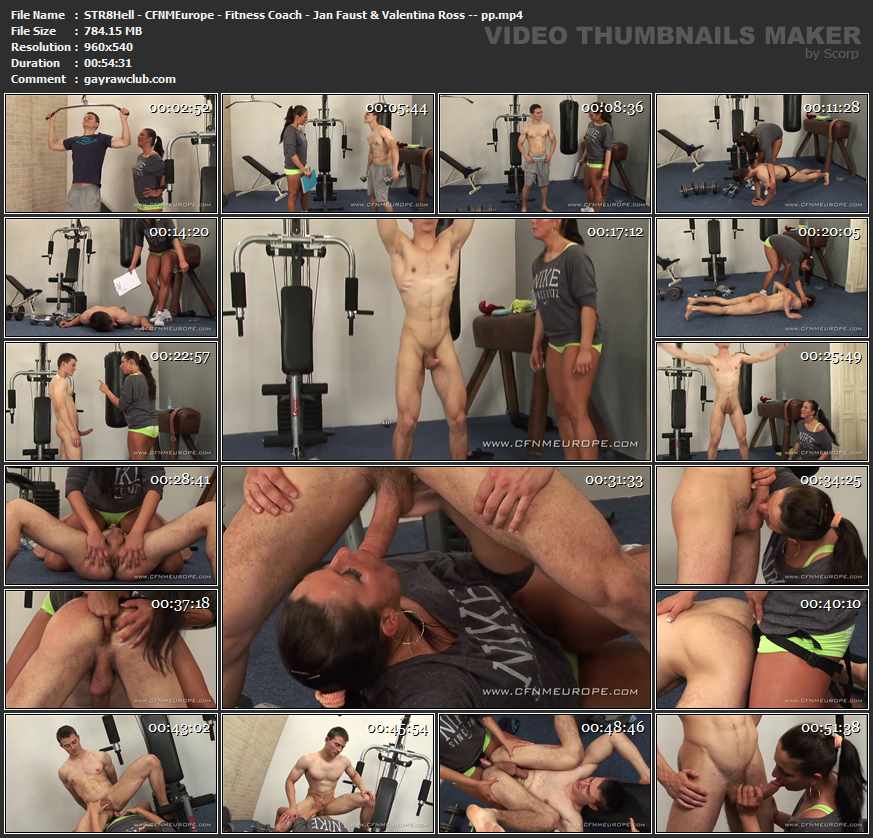 We brought Ivo Kerk in for a CFNM scene. The action starts with a young lady sitting and waiting for dinner. It seems that Ivo is late arriving. When he arrives he explains that he overslept. The meal doesn't go far before the girl is on her feet, caressing Ivo. She leans over and they start to kiss. Her seduction of our hot stud continues as she opens his shirt and has him stand. Her hands run over him and down to his crotch. Then she has his jeans pulled down some and she checks his ass, pulling on the hairs. Ivo turns and exposes his cock as the girl is on her knees in front of him. She starts licking his hairy legs and then her tongue touches Ivo's cock. If he expects a slow seduction things change as the girl stands and spanks his hairy ass. But she he made Ivo hard and begins sucking on his cock. She sucks and wanks it and then binds Ivo's hands behind him, pushing him onto his knees. Naked and laying on the floor Ivo is at the mercy of our sexy girl. She torments him before taking a banana and shoving it against his ass hole. She really works at pushing it into his hole before pulling it out and unzipping it and making Ivo eat it. Then the girl sucks on Ivo's cock again before moving to the next stage of her torment. She dons a strapon and makes Ivo suck on it. Bending over a chair Ivo's ass is available and the girl wastes no time, she shoves her rubber dick deep inside. She fucks Ivo's hole so good, turning him over into missionary position as she works his hole. As she fucks that ass Ivo takes hold of his cock and wanks himself to a climax to end a great scene. 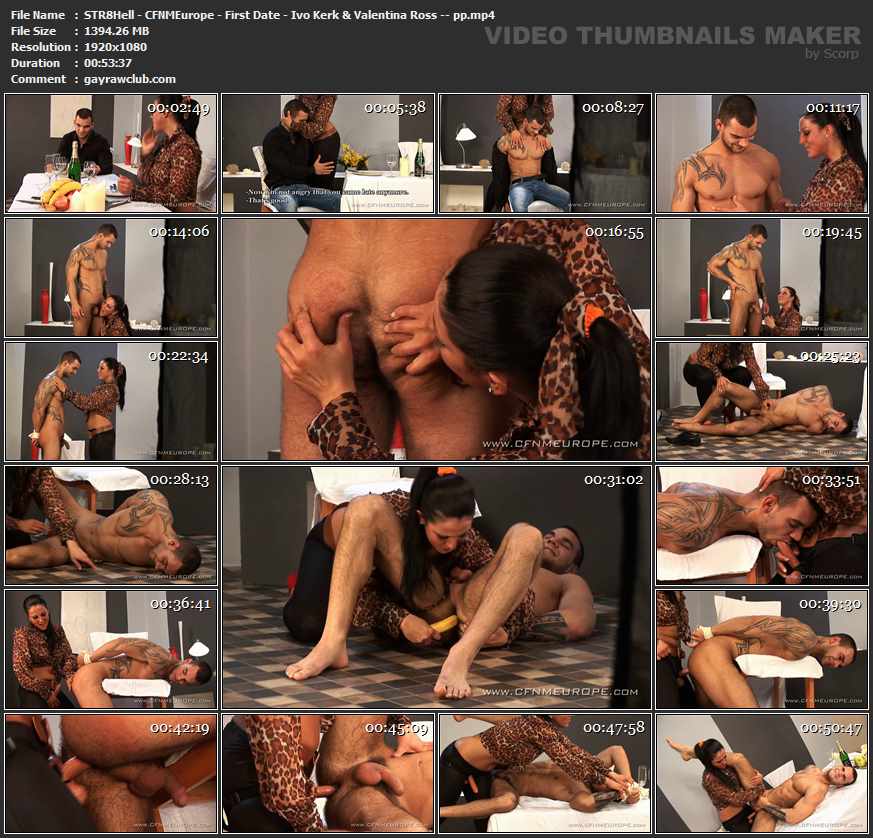 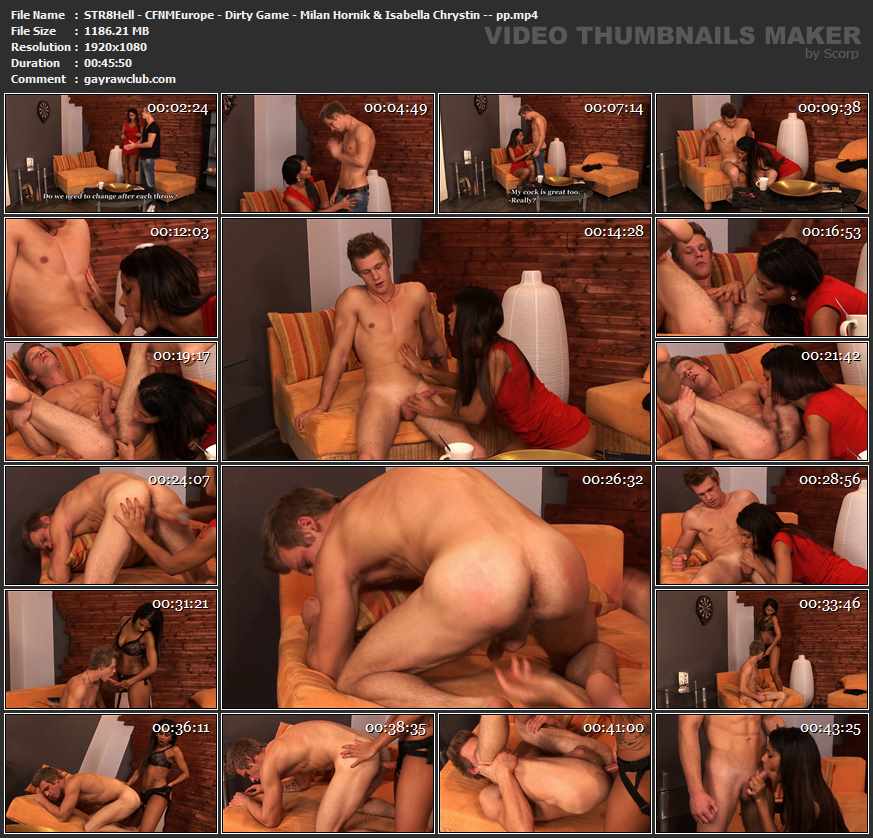 Anton Malac is the subject of this lovely CFNM shoot. He has met up with a beautiful girl and has told her that he is a virgin. He thinks the girl is going to change that situation. She strips him naked and plays with his cock, getting it nice and hard. But she has plans for the unexpected. Blindfolding Anton she ties his up and begins to torment his cock and balls. Anton moans as he feels the pain in his balls. She slaps at those balls, making Anton moan loudly. Then she ties his cock up and pulls on it. Next she gags Anton with a ball-gag and ties his feet together. With a cane she begins to hit his ass and body making him moan more. With his legs up his ass is fully exposed as those balls get punished more. Then that ass gets it, with a strapon being fucked into that tight hole. Anton can do nothing about it, except moan through that gag. He is then tied over a work bench and gets his hole fucked some more before being released and forced to wank himself, as he sucks on the rubber dick, until he shoots his creamy load. He is no longer a virgin, but not as he expected.