23-06-2022, 11:46
The scene opens with muscle-boy, Draven Navarro in a full suspension, awkwardly spinning, hovering above the sand in a gigantic geometric dome. His muscular veiny arms are bound to his broad chest. He wears only a sweaty black leather jock and leather boots. Kristofer Weston saunters in, dressed in leather chaps, boots, vest, and stinky pit t-shirt, smoking a cigar. He takes a puff and blows it on Draven's shaved asshole. Mr. Kristofer smacks around his boy as he is suspended in the sand pit. Draven is released and Daddy makes him trot in a circle, warming him up for severe flogging and then the sting of the single-tail whip.
In the next scene, Draven is kneeling, hands restrained behind his back. Daddy kicks his hard dick around with his boot, only to reward him with daddy's hard dick in his mouth. Mr. Kristofer throws his boy over the black leather spank-bench, spits on his welcoming hole, and slides his raw dick all the way in. Kristofer fucks Draven's welcoming hole, edging him to orgasm but sadistic Kristofer has one last surprise.
Draven gets tied spread-eagle. Ropes on wrists, ankles, dick, and balls keep him tied down. He opens his mouth wide to accept Daddy's piss. Draven's welted back from the whips digs into the sand and Daddy jerks off his good boy until he cums a huge load. It drips down daddy's hand and he feeds it to his boy, leaving him to wallow in his own filth. 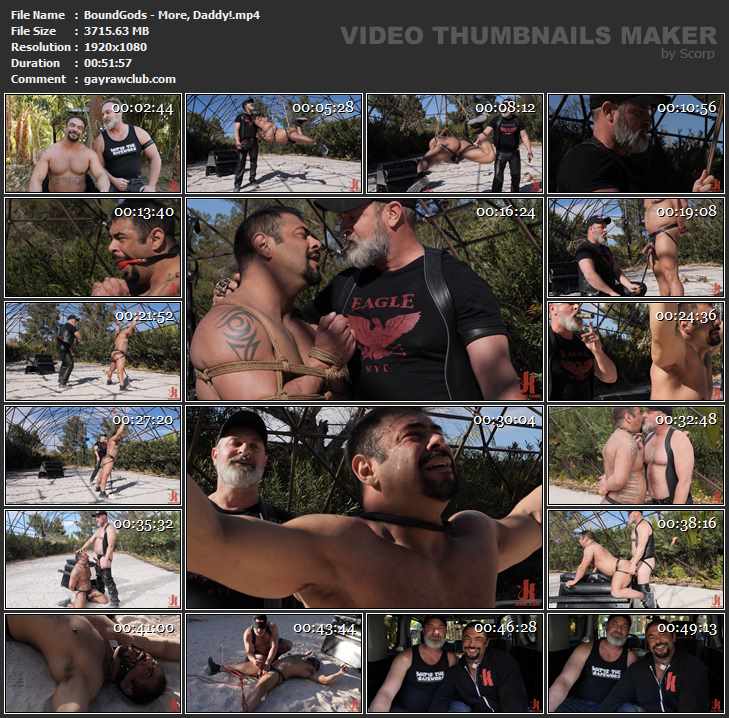